Liquid chlorophyll – the first product of light, the basis and the cure of our life!

What is liquid chlorophyll?

Chlorophyll is a green pigment that gives plants a rich, leafy green color. Although it is also a source of greenery, the lively pigment of chlorophyll allows plants to absorb sunlight and turn it into energy, stimulating the growth and renewal of cells. At the molecular level, chlorophyll is almost identical to the haemoglobin, the oxygen transporter in our blood. The only difference between haemoglobin and chlorophyll is that haemoglobin has iron in the middle of the molecule, while chlorophyll has magnesium. Therefore, chlorophyll is a large oxygenator in our body. Chlorophyll has many other therapeutic properties and thus actively alkali the organism, stimulates the growth of aerobic (friendly) bacteria in our intestines and thus performs detoxification and acts as an anti-inflammatory body returning to the natural pH balance. 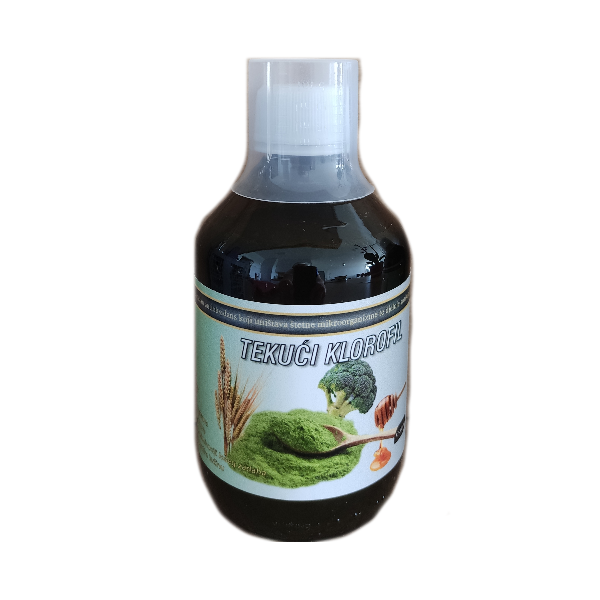 Liquid chlorophyll is a superfood rich in chlorophyll in its natural form, providing essential nutrition for our body.

It best shows its positive impact on the health of barley grass leaves with the help of antioxidants and primarily the critical superoxide dismutase enzyme which helps neutralise the effects of free radicals produced during energy generation in the organism. This valuable superfood can be proud of its rich vitamins, minerals, enzymes, essential fatty acids and antioxidants. In addition, it is a source of fibres that ensure healthy and balanced digestion. Vitamins a, B, C, E and K abound, while minerals distinguish magnesium, zinc, iron, calcium, potassium, phosphorus. GLUTEN free!

The specific nutritional composition of leaves of young wheat provides a beneficial effect on the skin, hair and nails. Due to the numerous plant chemicals contained it is considered to have an anticarcinogenic and detoxification effect. It also has a positive effect on digestion, prevention of cardiovascular diseases and generally enriches nutrition.

It is particularly recommended for weakened immunity, persons exposed to increased mental and physical efforts, athletes, post-surgery and recovery times, diabetics and irregular and uniform nutrition. Young wheat fits well in the health strategy in a natural and environmentally sustainable way in order to increase the level of living energy.

LEAF AND FRUIT OF FRESH BROCCOLI!

Epidemiological studies have shown that fresh leaves and the fruit of broccoli can be a particularly effective strategy for reducing the risk of cancer. This type of vegetable is rich in plant chemicals glucosinolates that are transformed into isothiocyanates by the action of enzymes in human plants and digestive tract. The main representative of the group of isothiocyanates is sulforafan, a herbal compound from the broccoli that is most interesting to scientists because of its anti-carcinogenic activity. Also, the broccoli is rich in carotenoids, namely lutein, zeaxanthin and beta-carotene which preserve eye health. Broccoli is a source of various antioxidants, such as chemferol and quercetin, which have numerous protective effects on health, including anti-inflammatory and anti-hypertensive effects, protect the health of the heart and blood vessels, and have an anti-carcinogenic effect.

Scientific research has shown that broccoli has protective effects from some types of cancer, especially breast, prostate, urinary and digestive cancers. It is interesting how active substances from the broccoli preserve the health of the brain and nervous system, and can also slow down cognitive deterioration associated with aging.

What are the benefits of liquid chlorophyll?

Liquid chlorophyll is a substance that is nowadays considered the strongest natural agent to protect the organism against changes in cells that can lead to uncontrolled tumour growth. It reduces the ability of carcinogenic substances to bind to DNA in the liver and other organs. In addition to helping to rebuild and restore red blood cells, chlorophyll has more health benefits.

It alkalises the organism – it is known that acidity can adversely affect our health because it stimulates the growth of bacteria, fungi, viruses and parasites. Chlorophyll alkali the body (it prevents acidity and makes blood alkali).

It is an anticarcinogenic medicine – chlorophyll protects against a whole range of carcinogens, which can be found in food and contaminated environment. The research, published in the journals Carcinogenesis and Food and Chemical Toxicology, clearly shows that chlorophyll inhibits carcinogens (it has been found to destroy colon cancer cells). It has also been found to improve the effects of cancer medicines.

Antioxidants and antirheumatic drugs – chlorophyll contains high levels of vitamins A, C and E and has strong antioxidant properties. In addition, chlorophyll has been found to have anti-inflammatory properties.

It removes heavy metals from the body – chlorophyll is one of the most important chelates in nature (chelation – attaching heavy metal atoms to complex organic compounds and expulsion from the body). Its ability to bind and remove heavy metals (like mercury) from the organism makes it a powerful healer.

Breath from the mouth – Removing the unpleasant breath from your mouth is an additional bonus for taking chlorophyll. In addition to acting as a natural deodorant, chlorophyll destroys the bacteria Helicobacter pylori and normalises the health of the digestive system.

Liquid chlorophyll supplies the body with magnesium, oxygen cells, contains vitamins K and C, folic acid, iron, calcium, proteins. Magnesium consumed with chlorophyll is a vital material for man. It is necessary for normal work of the heart, nerves and muscles, and it participates in activation of more than 300 enzymes which ensure smooth flow of numerous metabolic processes. It is absorbed in the small intestine, which is favourably influenced by vitamin D. regulator its total body content is kidney, and the reserves are in the bones. Chlorophyll biological activity is based on the ability to pass through a cell membrane where it neutralizes free radicals in a cell. Chlorophyll has 2,000-fold greater antioxidant activity than blueberries and 20-fold greater antioxidant activity than resveratrol. Therefore, it has been attributed to chemoprotective action and cell protection following administration of radiotherapy. Liquid chlorophyll has medicinal properties in the treatment of skin diseases. It reduces inflammation and inhibits the growth of bacteria in wounds on the skin. It is used to treat acne and sunburn. It is a favorite drink of athletes, because it helps accelerate elimination of surplus lactic acid, the cause of inflammation in muscles and joints. Scientific studies have shown that liquid chlorophyll stimulates the construction of protein molecules that form part of haemoglobin in the blood. Haemoglobin helps cells bring oxygen. Stimulates iron absorption which increases the proportion of red blood cells and haemoglobin in the blood. It also increases the production of white blood cells, white blood cells that have a defensive function in the body. Liquid chlorophyll has an antimutagenic effect. It has the ability to bind and eliminate toxins, heavy metals, polycyclic hydrocarbons, amines that we consume via food, water and air. Studies have shown that it reduces the absorption of toxins such as aflatoxins, which are triggers for the formation of liver cancer cells.

Chlorophyll affects the entire organism directly or indirectly, allowing it to build and regenerate. It cures damaged conditions at cellular or body level. It penetrates tissues, purifies them and restores them. He’s carrying oxygen with him. All body tissues, especially the brain, function optimally only in a high oxygen environment. In one word chlorophyll brings life!

How do you consume liquid chlorophyll?

It is recommended to mix the liquid chlorophyll once a day, before lunch 20 ml, with cold water or fruit juice!

It is not recommended to mix with hot or sour drinks as enzymes are destroyed.

It is recommended for people over 16 years of age and adults!

The dosage cup is supplied with the product! After opening, liquid chlorophyll should be kept in the refrigerator and consumed within 15 days!

Green coloured stools or urine and coloured tongue may occur, which is a normal phenomenon without stopping the intake. The product is not recommended for pregnant and breastfeeding women.

We use cookies to provide you with the best experience on our website, and you can agree with the review of the page using cookies. You can find out more about the cookies we use or turn them off in settings .

Protecting personal information is very important on the web site
http://www.anticevic-zdravlje.com.hr.
The use of a website is also possible without the provision of personal information, however, if the respondent wants to use some of the services of this website, personal data processing may be necessary. If data processing is necessary, however, for
there is no legal basis for it, consent will always be asked by the respondent. Full document of - privacy
policy".

Strictly Necessary Cookie should be enabled at all times so that we can save your preferences for cookie settings.

If you disable this cookie, we will not be able to save your preferences. This means that every time you visit this website you will need to enable or disable cookies again.

Please enable Strictly Necessary Cookies first so that we can save your preferences!